I know, this is quite a “First World” kind of problem isn’t it. Nevertheless…

As I’ve written before, I like coffee. I probably spend too much on the beans as well. So, there is a need to store them correctly to maintain the best flavor for as long as possible.

There’s also one more wrinkle to deal with. Freshly roasted coffee beans emit gas, mostly carbon dioxide, for several weeks after roasting. If the beans are sealed in a container, it may eventually burst from the build up of pressure from the gas. (As far as I know, the CO2 doesn’t affect the flavor adversely.)

One thing we need to admit right up front is that coffee sellers have dealt with these problems very effectively. Commercially packaged coffee in the US is usually packaged in a sealed bag made with layers of paper, metal foil, and polyethylene/polypropylene. The packaging eliminates light, air, and moisture infiltration until the bag is opened. These bags usually include a one-way valve to allow built up CO2 to escape.

The packaging is even fairly effective after opening the bag, unless you refrigerate or freeze the bag. If you roll the bag up after use, you eliminate much of the air from the bag – just try and squeeze air out after rolling the bag back up. The one-way valve will allow gas out, but the rolled up portion of the bag is likely pretty tight. It’s pretty hard for air to diffuse back into the bag.

So, problem(s) solved. Why write this post? Well, the bags aren’t (usually) very pretty and a big variety of them out on the kitchen counter can look a little untidy. What to do, what to do…

The search turned up a large number of possible solutions. First up are these AirScape® canisters from Planetary Design. 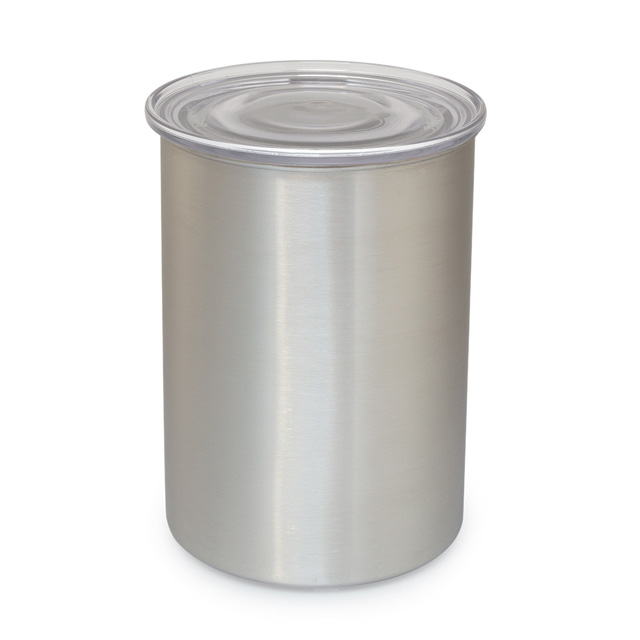 These containers are attractive, come in different colors, and are available in different sizes. Their “killer” feature though is that an inner piston can be moved down to the level of the contents, expelling any dead air above the contents. My wife uses these for tea and brown sugar, where they work great. For coffee though, we still have that problem of CO2 being emitted by the beans. Might just blow the top off eventually. (Haven’t ever tried to find out.)

Next up are these nice vacuum sealed canisters from Osaka. 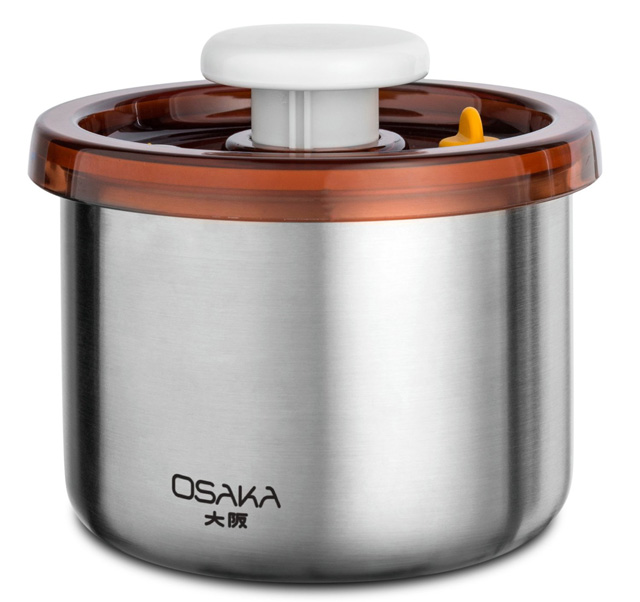 This handy little container forms a vacuum-tight seal when you close it and lets you pump the air out. Theoretically, it might do a better job at removing air than the AirScape described above. But there is still the problem of what happens with emitted CO2. Depending on the way the vacuum pump works, it might allow the gas through after it re-pressurizes. Also, the top appears to be a transparent brown. Light probably isn’t a problem through this material, but who knows.

What I actually decided to try is this canister from Gator Coffee. 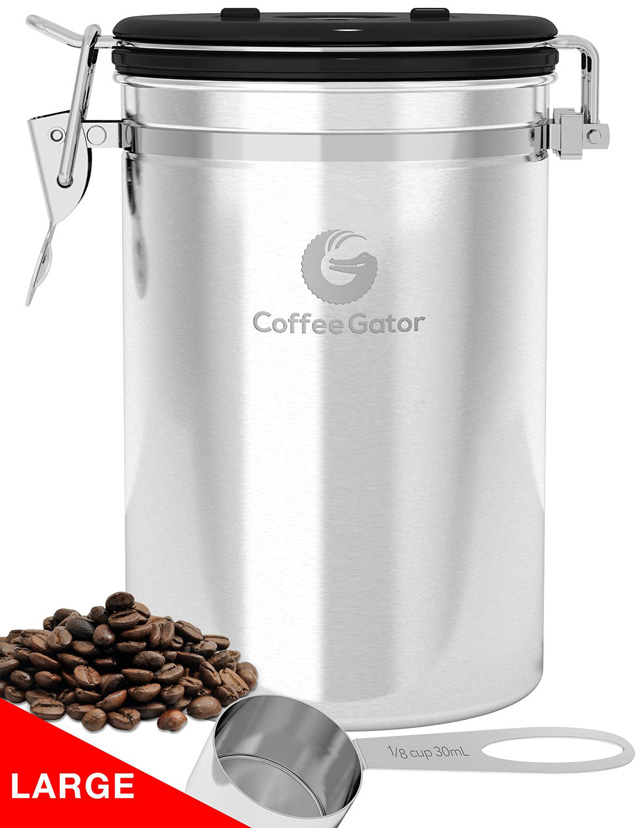 This one is completely opaque and has a one-way valve to release any gas that builds up. It’s one of the more expensive of many similar options. However, the valve on this canister is permanent. Many lower-priced alternatives have valves that must be replaced from time to time. You could buy them or cut them out of the coffee bags you purchase, but it’s a bit more hassle. The only downside with this canister is that you introduce air every time you use it. We’ll see how much difference that makes. Hopefully, the freshly roasted beans I store in the canister will generate enough CO2 to displace the air between uses. Bags of coffee are consumed pretty quickly around here. They should still be generating CO2 and displacing air until they are used up.

If the Coffee Gator doesn’t work out, I’ll probably try the other two starting with the Osaka.

All of these options look great, satisfying the aesthetic imperative that started me on this search. And it was surprising how many options there were. It’s nice to have problems with so many potential solutions.

(One last side note. I just love typing “coffee” here because the fonts in use have such lovely ligatures for the “ff”. Aren’t they nice?)